One of my missions in Iraq was to train the Iraqi police force. I knew that things like language and culture would be significant hurdles to overcome. One thing I wasn’t prepared for was working with their weapons. As an Army soldier, I knew my personal weapon inside and out.

I carried an M16A2 rifle. In combat zones, my rifle was loaded with a 30 round magazine filled with 5.56mm ammunition. A combination of bullet size and barrel length (20in) gave the M16 a near perfect balance of impact and accuracy. 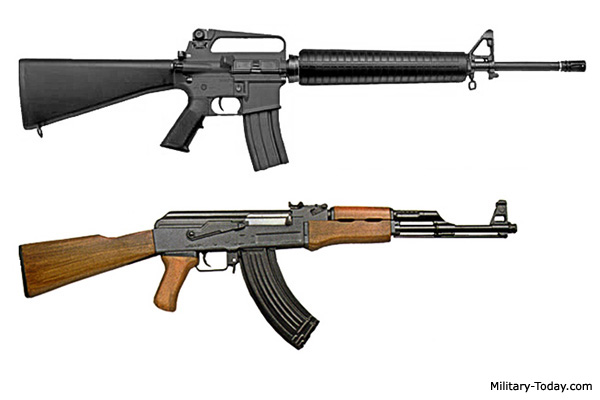 We would be training Iraqis carrying Ak-47’s. Their weapons were loaded with 7.62mm ammunition. With a fully automatic firing mechanism, and a barrel length nearly 4” shorter than the M16, this weapon is more concerned with quantity than quality.

One of the major differences between these two weapons is their fail rate. The M16 is far more precise and therefore susceptible to malfunction in desert environments. Just a few specks of sand in the right place renders the weapon inoperable. The AK on the other hand is known for its versatility. Whether it’s underwater, slopped in mud, or covered in the unforgettable dust of a sand storm, the AK-47 fires nearly every time.

Just like choosing a weapon in a combat zone has multiple considerations (size, durability, accuracy, etc), choosing a tactic is important for Christians, too. Preachers often employ a tactic called evangelism. Evangelism is simply sharing the good news of Jesus Christ. Like the M16, evangelism works best in friendly environments. Whether you are in church, Bible study, or sharing your faith with someone asking to hear more about Jesus, evangelism is precise, powerful and effective.

Evangelism can utilize all 66 books of the Bible, which includes 31,102 verses written by 40 different authors. The Bible has been translated into over 1,200 languages. All authors have their own unique perspective and style. But the Bible’s consistent message is ensured through the work of God himself. For all of Scripture is God-breathed and useful for teaching, rebuking, correcting and training in righteousness (2 Tim 3:16).

Just like sand in an M16, however, a skeptic’s cognitive bias will render an evangelical approach ineffective.

In areas where Christianity is not well received, an apologetic approach is a better tactic. Apologetics takes place on the battle ground of the mind. It is a mental approach and comes equipped with reasoning, rationale, philosophy, and science. Apologetics is a suppression tactic.

“Good philosophy must exist, if for no other reason, because bad philosophy needs to be answered.”  -C.S. Lewis

Paul used apologetics when reasoning with the Greeks. “So he reasoned in the synagogue with both Jews and God-fearing Greeks, as well as in the marketplace day by day with those who happened to be there.” (Acts 17:16-17). You can see Paul using apologetics in somewhat of an automatic manner. You can hear that his reasoning would go out to anyone who would listen.

Which tactic do you use? How do you determine whether to choose an evangelistic or apologetic approach? Leave your comments below and be sure to check out our A Clear Lens podcast for great tips on how to engage the culture.

Ep. 197: Engaging the Faith of the Connected Generation

Ep. 194: What’s the best response when someone says, “That’s your interpretation”?

Help! My Pastor Became An Atheist!

Alex Aili - September 28, 2016
6
Be a tough-minded Christian and think for yourself.

Ep. 113: Why Everyone Should See the Gosnell Movie with Brian...

Ep. 157: Entertainment Is Costing the Church Its Young People

God Exists, Whether We Can Prove It or Not

The Christian Life: Pain and Gain